The price outlook for all five base resin volumes was mixed in April, and perhaps even more so in May and June. While PE and PS prices may have peaked, PP and PET tabs fell slightly and PVC rose. Contributing factors included lower raw material prices, rising resin inventories, lower operating rates, uncertain demand outlook and ongoing logistical issues. As noted earlier, higher costs and supply constraints for major additives have been another ongoing factor.

Polyethylene prices in April appeared stable, although some suppliers pushed to implement their April increases of 6 to 7¢/lb and issued new increases of 6 to 7¢ for May, noted PCW editor David Barry, Greenberg of The Plastic Exchange, and Robin Chesshier, RTi’s vice president for PE, PS and nylon 6 markets.

PCW‘s Barry ventured that PE vendors would be lucky to get some of the April increase in April or May. Still, all sources expected PE prices to remain firm until June, and would then depend on continued demand and the impact of Shell’s new PE plant on the market when it does. will become fully operational in the third quarter.

RTi’s Cheshier noted there was strong buyer resistance to March’s 4¢ increase, with supply already outstripping demand by about 2 billion pounds. Barry reported that logistics remained a critical issue throughout the supply chain. He noted that resin distributors have reported extended delivery times of two to three weeks for terminals to package resin or transfer resin to bulk trucks, and added that some railroads have asked resin producers reduce the volume of railcars shipped. The concomitant increase in logistics costs led to higher prices for finished products. 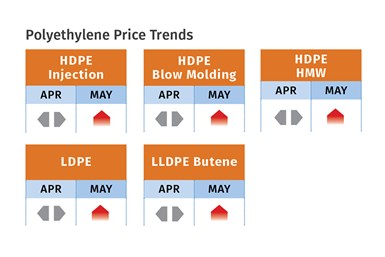 Reporting that suppliers did not like an influential price index’s call that April PE contracts would be rolled over unchanged, Greenberg of The Plastic Exchange noted that PE spot prices had risen by 2 ¢ to 4¢/lb in April. He also noted that while PE exports in March were up around 30% from the previous month, logistical constraints remained. “Houston warehouses are always full of resin, empty railcars for producers to fill are scarce, key rail lines are congested and trucks are out of stock, lending itself to further upward pressure on producers. PE price.”

Polypropylene prices in April fell 1¢/lb at the same rate as propylene monomer, after rising 16¢ in total in the previous two months. Meanwhile, suppliers announced “non-monomer” increases of 6¢/lb, on top of any monomer changes, according to Barry, Greenberg and Newell.

According to Newell, “Market fundamentals do not allow for a 6¢ margin expansion, but vendors have reduced operating rates to 80%, which with some Obligate major‘s, supports their increase. If demand strengthens and plant operating rates recover to 85% or more, propylene monomer prices will come under upward pressure from already tight supply. 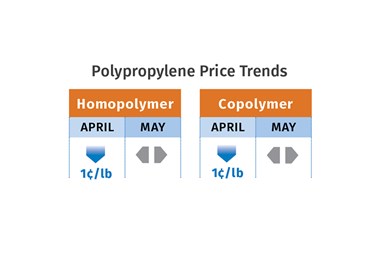 Barry noted that while some short-term supply dynamics support an increase in margins, this will not hold in the longer term. He expected that logistical problems would improve and transportation costs would decrease, in which case suppliers would then be faced with cheaper PP imports. (In April, PP exports to Mexico from the United States were between $1.00 and $1.10/lb, while PP shipments elsewhere were in the high 70¢ range /lb.) Greenberg reported in late April that sales to Mexico were strong, but PP prices were not competitive with those in other regions, due to “difficult logistics and limited vessel space.”

All three industry sources noted that vendors could get at least some of their non-monomer boost. Newell predicted that PP prices could drop about 5¢/lb this month. Barry ventured that PP prices in June would be mostly flat with no further margin expansion, but added: “June is traditionally a month of stronger demand. If crude oil remains at $100 a barrel, propylene monomer prices will remain firm. »

Styrofoam prices in April rose 9¢/lb, after rising 4¢/lb in March, but may well have peaked, according to RTi’s Chesshier and PCW’s Barry. Both sources noted that market fundamentals do not support high PS prices and believed that a steady downtrend was most likely from May to June barring a major disruptive event. 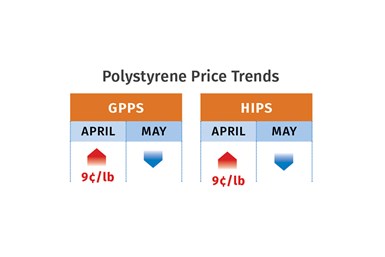 Barry noted that the main driver recently has been higher styrene monomer prices due to supply shortages. Earlier this month, he thought suppliers would struggle to sustain higher PS prices as a correction in the monomer supply situation was expected. The implied cost of styrene based on a 30/70 formula of ethylene/benzene, calculated weekly by OPIS (owner of PCW), was 45¢/lb to 50¢/lb until April. Cheshier noted that vendor increases to date were 6¢/lb above filler cost increases. She also noted that benzene and butadiene prices were holding steady and spot prices for styrene monomer had fallen 14¢/lb at the end of April.

PVC resin prices in April rose 3¢/lb, after rising 1¢ in March (on the 4¢/lb sought by suppliers), according to Mark Kallman, RTi’s Vice President of PVC and Engineering Resins and PCW editor Donna Todd. Meanwhile, there were nominations for a 3¢/lb contract increase for May.

Kallman noted that prices in May-June could be stable, due to more balanced supply and demand fundamentals, lower commodity costs and lower exports due to a chain of bottleneck. Still, he noted that much would depend on continued robust demand from the construction sector and the impact of a scheduled maintenance shutdown in May. 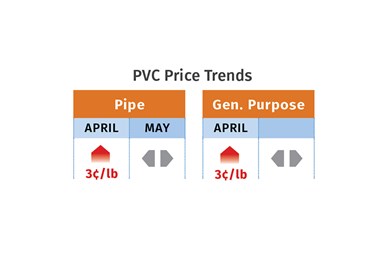 Todd reported: “There was already speculation in the market that producers were quietly reducing operating rates at their PVC plants due to a combination of the previously noted increase in producer inventories, the worsening problems with the railways and the fact that the export tons were unable to leave the country. »

PET prices in April fell 1.5¢/lb in line with a similar drop in net raw material costs, according to RTi’s Kallman, after rising 7¢/lb in March. Based on formula feedstock prices, Kallman ventured that May-June PET prices would likely be flat or slightly lower. Absent any escalation in crude oil prices, he saw commodity prices remain relatively stable, thanks to better availability of supply. “The market is still well balanced, with a recent PTA force majeureand with continued imports of PET.

He noted that even though the price of imported PET was higher than domestic prices, this premium had decreased.